> Uncategorized > Why Intel is crazy.. and a small prediction.
Intel will deliver 14nm based processors by late 2014 (link).
Yes, they got craaaazy and just thrown $5 billions into research so that they may move at twice the rate of Moor’s Law.
Why did they do this? Intel’s strategy had always been simple: be the fastest, others will fall behind.
However this shifted and nowadays this is not enough. 15 months after I got my HTC Desire, battery problems are yet to be solved, unlike many hoped.
The fact is that – depicted below – ARM processors put Atom in a corner once mobility is an issue.

And mobility is an issue, this (2011) is the year when Laptops + Desktop PCs loose to Smart-phones & Tables (link). 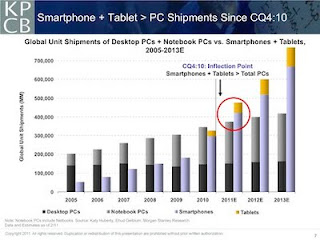 Once we know this and that ARM had already paired with IBM and publicly announced at the beginning of this year that they were targeting 14nm technologies (link).
Intel’s move becomes only a marketing stunt, they are actually trailing behind and following the market.
These are the wonders of capitalism 🙂 Moore’s law becomes the standard and the rate of the exponential grown becomes itself exponential. Singularity gets closer.
Another – perhaps more interesting – consequence, is that 14nm amounts to something like 30 atoms in length per transistor, leaving the traditional Moore’s law very little space left.
So yes, the third dimension will have to get into the game really fast.. and when/if this happens.. .. we’ll adapt and look for the next piece of technology.
Which brings me to my prediction 🙂
Point 1: Avatar was rendered on a cluster of 40.000 cores.
Point 2: Computer games now have budgets in the size dozens of millions of Euros, and I expect this to keep increasing.
Point 3: Immersive reality is a joining point on the two above.
I predict that the cinema industry as we know will be swallowed by near realistic games.
So, Hollywood is to the future games, as Theater was to Cinema.
Let me know what you think.

One thought on “Why Intel is crazy.. and a small prediction.”